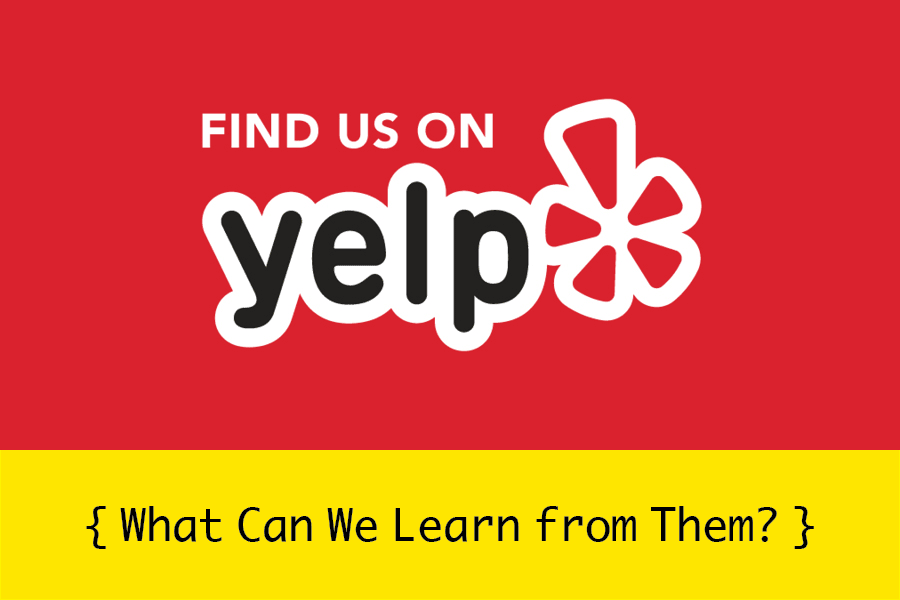 What Can You Learn From Yelp?

What are you hungry for?

It’s Saturday evening, and you’re hungry for something other than the same-old, same-old. You’re also tired of meal preparation.

Years ago, you would have hopped in the car and searched for a restaurant with a full parking lot and plenty of local license plates. Now you start surfing the internet using Yelp and TripAdvisor.

You look at the reviews. Maybe surf and turf? To your disgust, a customer of “Sam and Ella’s Seafood ” found a fishhook in the flounder! “Not only did the owner not apologize,” he writes, “but she actually growled at me when I showed her the hook.”

A review of a diner says, “They removed the charge for the cup of soggy blueberries I was served and gave me a gift card toward my next visit. Everything else was great. You bet I’ll be back!” You also find dozens of five stars that people awarded to an Italian eatery known for fresh food, low prices, and stellar service. Bingo!

You click the website to find hours and a menu. Once there, you also notice the restaurant isn’t afraid to feature those reviews on its website. Now that’s smart marketing.

You see, if the owner of Bob’s Burger Joint toots his own horn and claims to have the best burger in town, you might believe him. Or, you might not.

But if 47 reviewers on Yelp also claim that Bob’s Burger Joint has the best burger in town, you’ll probably take that into account. Tooting your own horn is one thing, but you’ve also got to deliver on the goods.

By featuring reviews that confirm his claims, Bob is establishing trust. That’s a savvy marketing move.

Who Do Others Say You Are?

Many fundraisers face skepticism and even resistance when they make a statement about the worthiness of their organization. “Your gift will help thousands of starving children.” “We’re changing lives for the better, every day.” “We champion solutions.”

They can bang the drums and crank up the amps to 11, but prospects and donors have been fooled so many times before — by the government, by corporations, and yes, even some nonprofits — that often their initial response to a first-person claim is distrust. Instead, they want to know who others say you are.

Rather than shout your own praises from the rooftops, incorporate what others say about you into your marketing. Testimonials and stories from donors, or from recipients of your organization’s services, carry much more credibility than anything you could ever say yourself.

Which is more powerful?

Here at the International Foundation for Digestive Research, we have helped thousands of people live better lives. Your donation will help us continue our work.

“My mother could no longer eat solid food, until research from the International Foundation uncovered the cause of her disorder, and pointed us to a cure. Mother is now eating steak! I am so thankful for their life-changing work, I’ve named IFDR as a beneficiary of my 401(k).”

Like Bob’s Burgers, a savvy nonprofit will help establish trust by spotlighting what others are saying about it. Donor stories and testimonials are essential elements of any marketing menu — like the ones in this sample Donor Album Flipbook.

Don’t rely on singing your own praises as a way to whet donors’ appetites. Letting others sing them instead is a far more effective way to bring them to the table.

PrevPreviousKeep the Romance Alive
NextNonprofit Board Meeting Agendas: A Quick Guide for SuccessNext