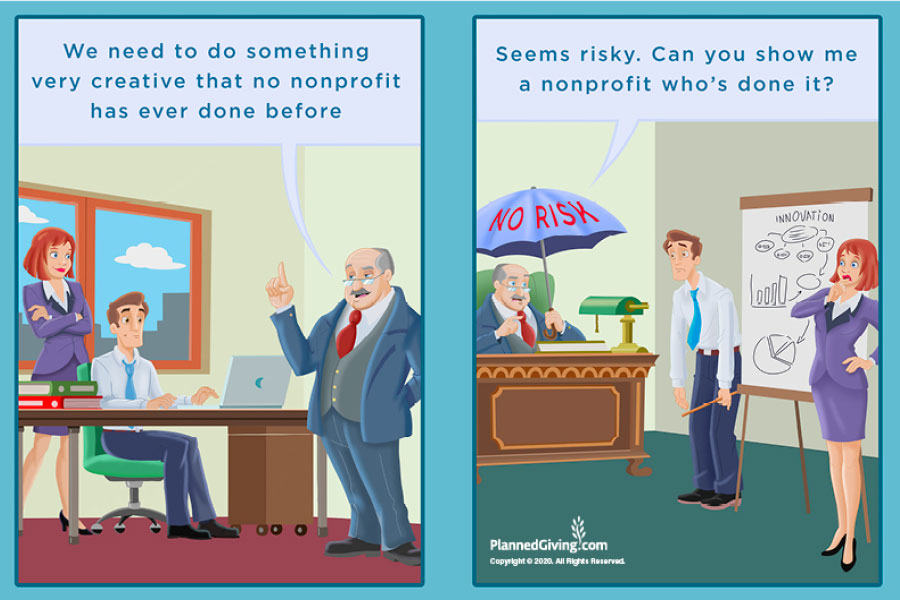 Same ole, same ole. Seems to be a habit among nonprofits.

Most of us in this industry are complaint averse. Scared. We don’t ever want to upset a donor or a prospect. But if you’re not getting some complaints, you’re not doing your job. Read on to find out what I mean.

Back in the ‘60s, famed marketing and advertising agency, Ogilvy and Mather, were hired by Lear Jet to create a direct mail campaign for their million dollar jets (If you haven’t heard of Ogilvy you need to do some studying).

Apparently Ogilvy decided to push the envelope of creativity and transformed “direct mail into air mail:”

They developed a campaign involving 800 homing pigeons (the ones that can fly long distances and always find their way home).

The pigeons were delivered, in cages, by messenger to corporate executives. Each pigeon had a small tube attached to a leg. Inside the tube was a form to be filled out requesting more information on the jets. (I guess there are “pigeon specialists” who do this kind of stuff.)

Of those 800, about 200 forms were filled out (not a bad return, heh?) and the pigeons released into the air to come home to roost. I guess that’s analogous to you sending your planned giving marketing materials via US Mail hoping to get a high response on your business reply cards.

The Campaign Had Some Challenges

Just like the issues we face in our own direct mail, they had some issues too. Read on …

Many of the offices in New York City did not have windows that opened thus lowering response rates. Think — what’s lowering your delivery and response rates that you had not thought of?

Some of the pigeons got loose in the office, flapping all over the place, pooping, shuffling office paper, and generally causing havoc. In one case, a pigeon got stuck in a women’s hair. In another, a pigeon decided to make the copier room home — attacking anyone who entered. Over 100 calls were made to the police and fire departments. Talk about complaints! (And you’re worried about typos in your planned giving newsletter? If you can’t stomach complaints, don’t mail anything.)

The entire campaign cost around $15,000. Despite the hiccups, the campaign was worth the hassle — 4 Lear Jets were sold at $1 million each. Not a bad return on an investment of $15,000.

When Ogilvy pitched Lear Jet they were not deterred by those who wanted a more traditional/safer solution. According to Tom Ahern: if you send out 10,000 planned giving newsletters and you do not receive at least 100 complaints, you’re not being heard.

If you take on the stance of “it was always done that way” your results will be predictable and the certainty of career advancement will be at risk.

… even if it does result in complaints about pigeon poop.

If you’re looking to break out of the mold same ole, same ole, make PlannedGiving.Com your solution provider. By the way, having worked with animal rights groups, we don’t advocate using pigeons.

PrevPreviousSECURE Act / Note to Clients and Friends
NextI Learned A Lot Of Things From My Dad. Here are Three.Next