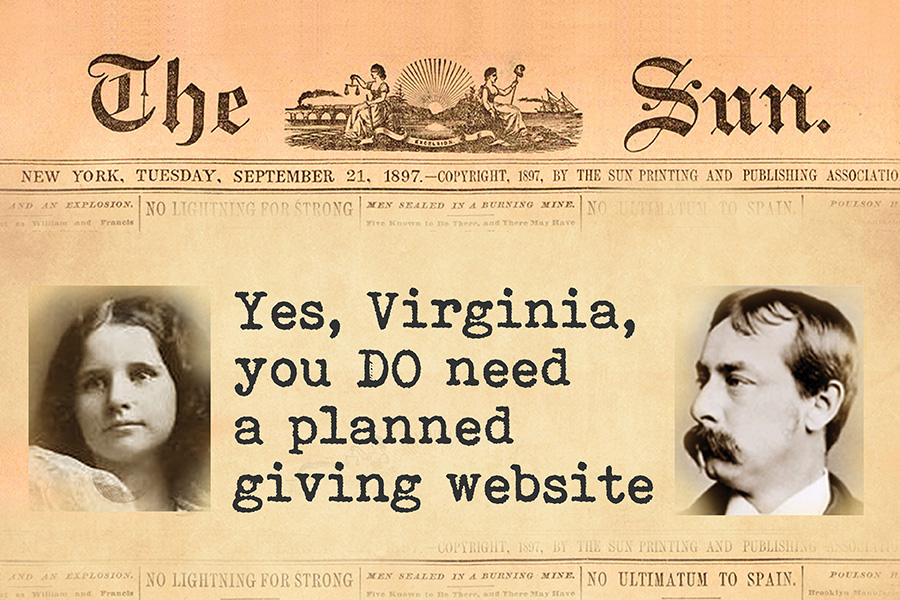 Yes, Virginia, you DO need a planned giving website

If you’re familiar with William F. Buckley Jr., you know he had an acerbic wit and did not, as the saying goes, suffer fools lightly.

I thought of him today when I saw a blog post penned by another planned giving vendor. Its sole purpose: To trash the idea that fundraisers need a planned giving website — and then try to sell their own website creation services by rebranding them as “micro-sites.”

“I prefer not to call them websites,” this vendor wrote. “Sure, they are online. But they aren’t websites. Instead, they are web pages.”

Based on that reasoning, my “micro” dog is really a cat; the snow that’s been falling all winter is fluffy water; sanitation workers are pickup artists; and gloves are actually finger socks.

In fact, let’s take that logic a step further and throw out our smartphones. Instead, we’ll carry around telegraph machines and a stack of encyclopedias (“Let me Britannica that for you”).

It’s Simply a Case of Envy

I’ve seen it before: From time to time, a vendor who just does not have the capacity to deliver what we are able to deliver finds ways to denounce our products — and then tries to sell their own limited version instead.

So let’s set the record straight: In the 21st Century, you DO need a planned giving website, and not just a glorified “web page.” If you don’t have one, you’re going to lose donor trust, and therefore, you’re going to lose donors. Why? Today’s internet-savvy consumer has come to expect that every business (you are running your nonprofit like a business, aren’t you?) has a website.

Donors. And … Their Advisors.

Furthermore, the website needs to be comprehensive enough for potential donors (and their advisors who have many other clients) to study their options, because today’s donors (and again, their advisors) do their own research before deciding if they’re going to give. If you don’t have a website — or you have one that’s so Spartan it would make a monk envious — potential donors are going to assume your charity is a bush-league pit stop on the road to failure.

While I always advise people to oversimplify when it comes to planned giving, that doesn’t mean nonprofits should skimp on the messaging vehicles they need to attract more and bigger gifts. Any vendor that tells you otherwise doesn’t have your best interests in mind.

Which brings me back to Buckley, and a very relevant quote I thought of when I read that blog post: “I won’t insult your intelligence by suggesting that you really believe what you just said.