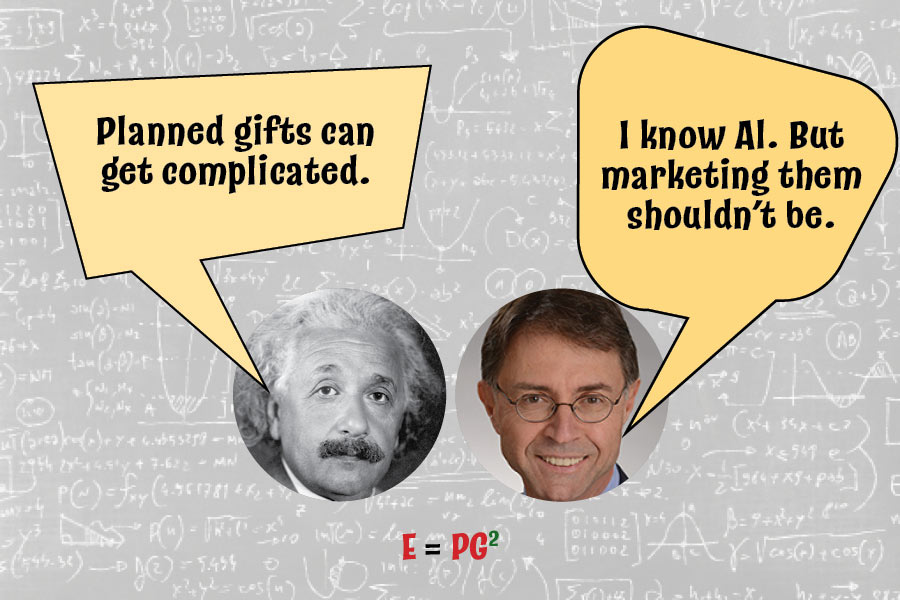 That’s why we have professionals like Meredith Sossman, JD; Camilyn Leone, Esq.; and Scott Janney on our team. And it’s a very good team.

But when it comes to effective planned giving marketing, all you really need is street smarts and commitment. Even Camilyn and Meredith above, both lawyers, publicly admit it.

However, admitting it is one thing. Putting it into practice at your nonprofit organization is another. Camilyn and Meredith get it, but most fundraisers out there don’t — and they don’t put nearly enough commitment into marketing their planned giving programs. Instead, they focus on learning all the technical details  of planned gifts.

Seriously — look at all of the fundraisers taking seminars on CRUTs, CRATs and CRAPs. They even take seminars on calculators. As my old saying goes, “If you need to take a course on understanding a planned giving calculator, where does that leave your prospect?”

Bored, confused, and looking for some other organization that knows how to inspire them to give.

To borrow from Einstein,

Effort = #PlannedGifts, doubled. Putting effort into marketing your planned gifts can result in an exponential increase in the amount of funding your organization will receive. And a good place to begin is with a plan.

It doesn’t take a genius to see the logic in that.

Effective planned giving marketing is not rocket science. An easy way to get started is simply by using your already-existing resources — website, any print materials, e-blasts — to mention your planned giving program (be sure to include the relevant contact information). You can also include a link under your email signature, and even mention it in your voicemail message.

When you’re ready to take it to the next level, consider billboards, magazine ads, even radio and TV ads  (check with your local stations for rates). Send out postcards and other direct mail pieces.

I have touched on this topic several times and I am not going to let up until our community gets it. Planned giving marketing is the key to success — and it’s too easy and important to ignore.