The Sexiest Seven Words in Fundraising

Once upon a time in a market far, far away, I worked at FORTUNE Magazine.

In retrospect, selling advertising in FORTUNE had a lot of similarities to fundraising. It was a great magazine with a specific editorial mission that competed for dollars with a lot of other fine magazines and newspapers. During my time there, an editorial colleague posed this fascinating question: “What are the sexiest six words in advertising?” I’ve never forgotten how he answered it and have made it one of my fundraising mantras to live by.

My publishing days seem a lifetime ago, and I have happily spent 10 years working in the development field. And still—stories are sexy. Tom Ahern, a direct mail consultant I highly respect, says it this way: “Facts tell, stories sell.”

Not just any story—an authentic story.

We’re all wearily familiar with the deluge of solicitations and exhortations from charities that fill our mailboxes, especially around the end of the year. I started paying closer attention to these letters once I began working in development. I noticed that most, if not all, rang hollow in sincerity. Even the letters that attempted to follow the “let me tell you a story” approach felt contrived. Some of the stories were so polished and so perfect that they just seem… fake. And let’s be honest. Many of them are fake. The “true stories” in direct mail are often a conglomeration of bits and pieces of stories from a number of different people, perhaps with a dash of creative license exercised by the writer. They feel contrived because they are.

Prospective donors have highly tuned B.S. detectors. So why even bother serving up inauthenticity?

A few years ago I decided to try a new approach with Big Bend Hospice’s end-of-year letter. Instead of merely including a donor “story” as part of the letter, I decided to make the entire letter the story. And I decided there is really only one way to achieve a truly authentic feel.

It actually has to be authentic.

So I invited a donor to partner with me in writing the letter—his voice, his photo, his story. The process was time consuming. Because while on one extreme, an overly polished story makes people skeptical, on the other, a boring story makes people tune out. It took a lot of time and patience as the donor and I went back and forth to craft a letter we were both pleased with. But the end result was a genuine story that felt real. And, as I had hoped, it was a letter that raised more money.

I’ve repeated this experiment the last three years for our end-of-year appeal letters, and each year the results get better. Take a look.

Now, some number-crunching “experts” might point out that a 2.7% response rate isn’t that great. I agree. It’s good, but not great. The numbers that make me happiest are the total funds raised and the cost to raise a dollar. Only 13 cents to raise a dollar? I’ll take that any day. $73,000 donated in support of our unfunded programs? Yes, please.

Giving comes in many forms. Our supporters can give money. They can give of their time and their talents. They can spread the word about us to others. And they can give their story. The gentleman I worked with on last year’s letter is an 87-year-old, highly intelligent, highly engaged donor and volunteer. His letter focused on the care our hospice provided the woman who was the love of his life. For a donor to share his or her experience—especially something as deep and personal as the loss of a loved one—shows a lot of trust in the organization. I can’t think of a better way to do donor retention than working together over a period of several months on such an important and personal project.

My colleagues and I have been so pleased with the successful fundraising letters that we decided to expand our authentic storytelling approach to video vignettes. We worked with a local firm to create a video highlighting our bereavement programs to help teenagers who have lost a family member. Our video isn’t flashy or slick. It doesn’t use the latest greatest camera technology. It simply features real kids talking to the camera in their real voices. The end result is authentic and heartwarming. Donors love it.

So: What are the sexiest seven words in fundraising?

“Let me tell you an authentic story.”

Nigel Allen is the Executive Director of the Big Bend Hospice Foundation in Tallahassee, Florida. He was drawn to the mission of hospice care after experiencing the illness and death of his father who did not receive the benefits of hospice care, and the subsequent end-of-life journey of a close friend who did. 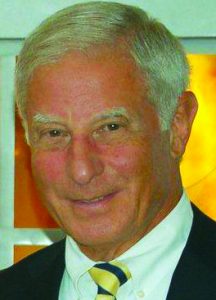 Jim Friedman is Director of Planned Giving and Endowments for the Jewish Federation of Cincinnati. Jim’s family has been in Cincinnati for five generations and takes great pride in the prominent role Jews have played in the Cincinnati community. jfriedman@jfedcin.org
All Blog Posts